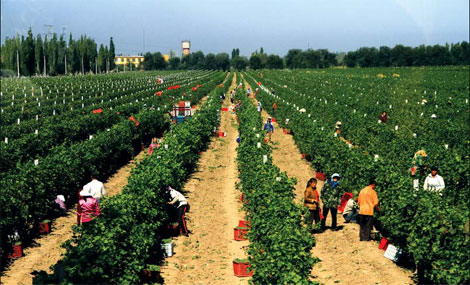 This article is the second of a series of articles shining light on some of the newest wine growing areas in the world. Check out the first article here.

Following archaeological investigations, winemaking in ancient China started around 1st-3rd century BC, but in the more recent history we can say that modern winemaking in China started in the late 19th century when Zhang Bishi started growing vines under the brand Changyu. The company was quite successful as testified by the awards it won in the early 20th century. After the revolution, the focus was shifted a bit until the revival of China towards the end of the 20th century.

Forecasts from Vinexpo predict that the still wine consumption in China will be the largest in the world by 2020. If sparkling wines are taken into consideration, China is the second largest consumer in the world, just behind the United States, surpassing both France and the United Kingdom.

Those are amazing numbers, from a country where in the 1980s wine was hardly available.

Have a look at the below statistics from 2016, showing the wine production volume by country: 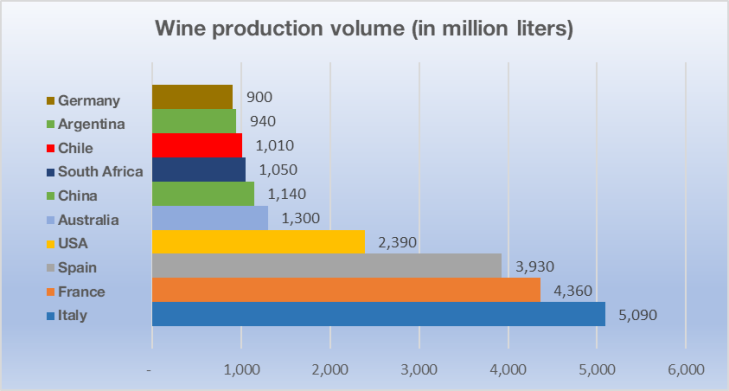 Most of the wine produced in China is for domestic consumption. Then see the below import volumes of wine by country of origin. It is clear that China has become a huge player for all wine-export countries in the world. 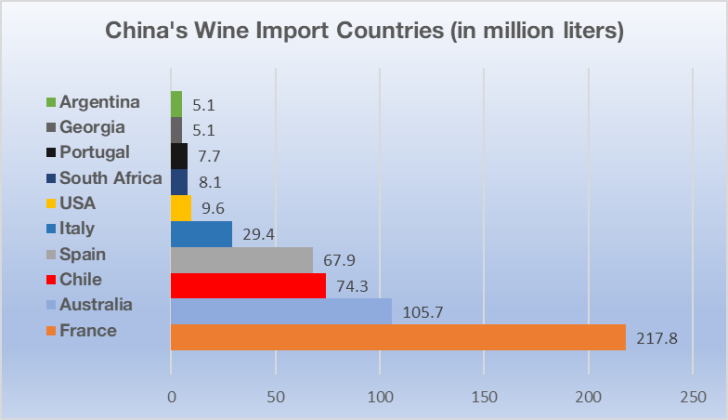 The vast majority of the domestic wine production is consumed within China, but overseas interest started to take off in recent years.

The quality of wines made in China is strongly improving, also proven by the awards Chinese wines were awarded at the 2018 Decanter World Wine Awards (DWWA)

With 183 Medals and Seals of Approval, Chinese wines doubled previous year’s result, making it the most successful year ever for Chinese wines. 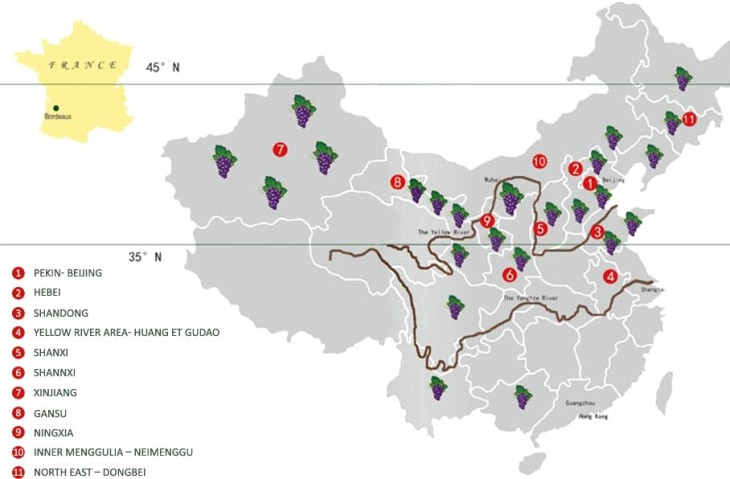 The pioneer in China’s modern winemaking without a doubt is Changyu. Founded in 1892 in Yantai, he experimented with varieties such as Traminer and Riesling and received several awards in the early 20th century. This was the beginning of a new era for Chinese wine, although it took a long time to further progress.

With the restructured economy in China that started in the 1990s, the country made huge steps economically. Fast forward to 2018, and we see that the largest wine auction in the world has now become Hong Kong. This is also where most of the Bordeaux are being traded which is reflected in the huge jump in Bordeaux prices in the past two decennia.

Some of the wine houses in China have called in the help of reputable wine makers and brands from overseas and this helped the development of Chinese wine tremendously. Chandon, the famous sparkling wine producer owned by Louis Vuitton Moet Hennessey, expanded to northern China and grows vines there since 2013. Another sign that China is being taken seriously as a wine country.

Austria’s most important winemaker Lenz Moser, is such a great believer in Chinese wine that he has been advising China’s largest winemaker Changyu since 2005. With his help, the quality of the wine it produced increased significantly and is now even being exported to the Old World, Europe where it can be bought in some of the finer restaurants and hotels. According to Moser, this is just the beginning and he, together with many others alike, believes China will become a leading wine exporter in the next decade or so. At Changyu, Moser produces some wonderful Cabernet Sauvignons, Bordeaux blends as well as a blanc de noir made of Cabernet Sauvignon. 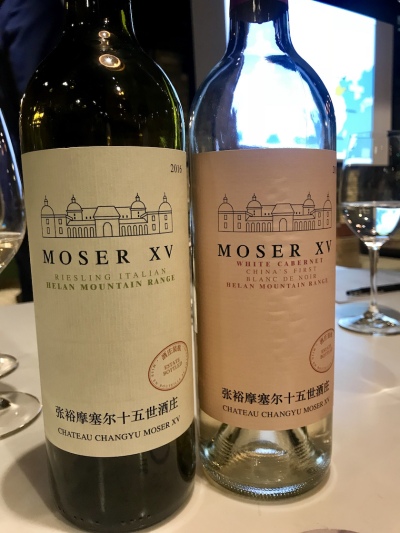 With China’s growing population and economy, and its limitless ambition, we could well be at the start of a revolution in the wine world. China might play a key role in the next few decades ahead.

This article is the second of a series of articles shining light on some of the newest wine growing areas in the world.

Have you experienced other Newest World Wine regions that are worth sharing? Let us know in the comments below!

On our website we share with you our stories as we are on the hunt for our daily dose of wine. We are two wine enthusiasts from Europe in our thirties and currently live in South-East Asia. Wine has really taken off here in the past few years and it’s great to see our-so-beloved fermented grape juice being embraced by more and more people in this part of the world as well. While some wine snobs make wine overly complicated, we believe wine is about fun. Wine adds so much joy to our lives, and we hope that by reading our posts we are able to share some of that enthusiasm with you. Santé! Albert & Willem View all posts by THE WINE JUNKIES

St Emilion is one of The Wine junkies favorite Bordeaux wines and this is why…⠀⠀⠀⠀⠀⠀⠀⠀⠀
"Sunsets are proof that endings can often be beautiful too"⠀⠀⠀⠀⠀⠀⠀⠀⠀
In our mind one of the best ways to discover a vineyard is through a hot air balloon.⠀⠀⠀⠀⠀⠀⠀⠀⠀
#winechallenge number 06 from @winefolly on a warm summer night in Amsterdam⠀⠀⠀⠀⠀⠀⠀⠀⠀
We were delighted to have seen with our own eyes how the Henschke family has been responsible for playing an important role in the history of Australian winemaking. The sixth generation of Henschke’s has now stepped up to continue what their ancestors have been successfully doing for many years and it was reassuring to see that this legendary winery is in good hands to continue to lead Australian winemaking to new pinnacles in the future⠀⠀⠀⠀⠀⠀⠀⠀⠀
Did you know that Grapes Are Actually Berries?⠀⠀⠀⠀⠀⠀⠀⠀⠀
Did you know that table and Wine Grapes Are Different...⠀⠀⠀⠀⠀⠀⠀⠀⠀
Tasmania is Australia’s southernmost wine-making region, and has a great reputation when it comes to food and drinks. It has some of the best seafood Australia has to offer, famous for its oysters, salmon and scallops as well as lamb, cheese and honey. Besides some of the best cool-climate wines, the island produces some renowned apple and pear ciders, whiskey, beer and even gin. In other words, a great place for foodies to visit⠀⠀⠀⠀⠀⠀⠀⠀⠀
Wine 16 of the #winefolly #winechallenge: #lambrusco from #cantinececi in this uber-cool blackboard bottle provided with a chalk and eraser to personalize your bottle. Our tasting notes; medium purple colour, sparkling, low viscosity, a nose of black currant jam, cranberry juice and potting soil. Medium dry, high acidity, low alcohol, low tannins and light body. ⠀⠀⠀⠀⠀⠀⠀⠀⠀
The wine junkies are pleased that restaurants & bars are opening up again and can enjoy a served glass of wine... We wish all of restaurant & bar owners all the best in the coming period🙏🍷💪🏼⠀⠀⠀⠀⠀⠀⠀⠀⠀
Did you know that the famous winery Château d’Yquem was almost English. During the Middle Ages, in fact, the estate belonged to the King of England, who was also Duke of Aquitaine at the time. In 1453, southwest France was once again brought under the dominion of the French crown by Charles VII and has stayed French ever since. A century and a half later, in 1593, a descendent of a local noble family, Jacques Sauvage, was given feudal tenure over Yquem. The Gironde department archives, as well as those of the château, show that special winegrowing practices and late harvesting already existed at this time⠀⠀⠀⠀⠀⠀⠀⠀⠀
One of the wine junkies favorite Champagne: Bollinger⠀⠀⠀⠀⠀⠀⠀⠀⠀
My Tweets

SHOP I THE WINE JUNKIES T-SHIRT 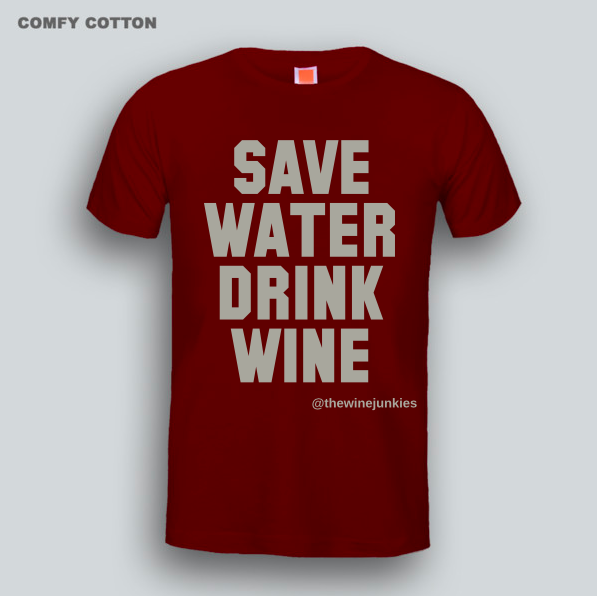 Show you are a fan of The Wine Junkies by wearing our unique t-shirt designs! Payments can be made by PayPal and BitCoin.

G’day, you’re at the best wine blog ever! We're all about wine; without the wankery.

Don’t wait to celebrate! Fabulous recipes to pair with Champagne and fizzy facts about our favorite bubbly beverage!

The World of Wine's Got Talent